No one upsets me except me 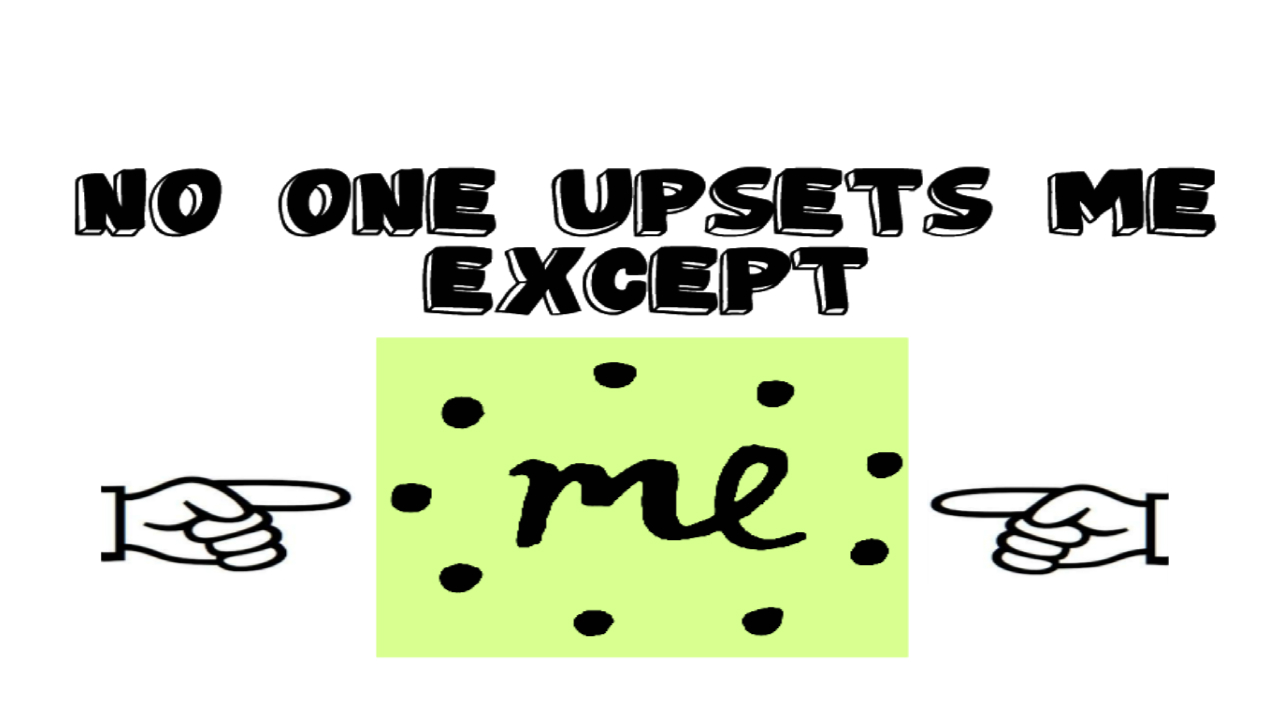 No one upsets me except me is a meme I came up with  when I was working with one of my clients.  At first, it may sound a bit weird but it really is true.  I just watched my own video on this post which I found very useful because I just fell into the trap myself believing that it was my son who made me angry.  Just watching this calmed me down, taking me out of the blame frame where I’m pointing outwards at someone else when they didn’t do what ‘I’ wanted. There I go again getting caught up in my own Ego.  It’s everyone else’s fault except mine!

No one upsets me except me – the realization through my own video!

But after watching my own video and reminding myself that I can’t get upset and unless I decide to, I just miraculously calmed down a bit and realised that if I leave the issue at hand for even a few minutes, my opinion about what should have happened might not change but, I’ll at least get quiet enough, to have some fresh less judgmental thinking about the situation at hand.

My darling son was supposed to call someone regarding a job I was involved in helping him get. The problem is that he only got married a few weeks ago and hasn’t really come back down to earth yet. I felt bad because of my involvement and commitment I gave to the other party that he was going to make this call for the job and he still hasn’t taken any action.

Just imagine how embarrassed I felt when I bumped into this person today and  found out that my son still hasn’t called.  Then I started burning inside with a feeling of betrayal and being let down, my Ego was in full swing, but it didn’t last long. The good news was, that when I rang my son, he wasn’t available to take the call. It was exactly what I needed at the time because I know when I speak to him next, I’m still going to tell him what I think needs to be done, but I’ll be more loving and understanding to his limits when I give him my piece of mind in a calmer more strategic way. This is because I have had ‘some breathing space,’ to allow for fresh clearer and calmer thoughts to come in.

The point I’ve learned from all this is that I’ll be okay even if he doesn’t do exactly what I want him to do.  And I know that the less invested I am in my own thinking about how things should exactly work out, the better off everything will be.

This is what I call the paradox of results.  The less attached I am to an outcome, the greater chances I have of it actually taking place.  There were these Olympic runners and one scored the Gold and the other the Bronze.  They asked the Bronze what was going on with him when he was running.  He said, “I just kept on telling myself, that I’ve gotta get this and I was very tense as I was huffing and puffing and just pushing myself to get first to the finish line and I just couldn’t get to first place!”  They then interviewed the Gold medalist and he said, “I just thought I give it my best shot and I was just running my hardest but I don’t really know what happened and the next minute I won the race!”

And that’s the point, he didn’t really know what happened because he didn’t have so much ‘heavy’ thinking about the outcome on his mind while he was running.

It really is amazing what you can do when you don’t have so much on your mind while you’re doing anything.  It doesn’t mean don’t think.  But when we are too hard on ourselves and we don’t feel good inside or we might even feel tight and uncomfortable in our bodies, then this is feedback from ourselves/our bodies, that perhaps doing a certain activity at this time of discomfort is not the right time.  Maybe just push it off for even a little while.

If you haven’t watched the video, please do, it might just calm you down like it did for me.  But as time goes by I find myself becoming increasingly more grounded in my understanding of the principles by Sydney Banks which just increases my peace and well-being.

When I become angry or upset which happens less often since I’ve learned the principles, I find that I am ‘on to myself,’ where I catch that uncomfortable feeling inside me and realise it’s time to just ‘step back’ for a while and see what new thoughts come up for me as I get quiet  again. This is the realization of the fact that that nobody upsets me except me.  Then I usually become receptive to a broader state of consciousness where these new thoughts which I call insights, come up for me and it has a soft warm pleasurable feeling and then I may use them to help me with any issue I have at hand.

Please let me know if you have been upset disappointed or angry and then you ‘caught yourself in the act’ when you felt uncomfortable in your body or in your mind.  This is a great sign of progress in your own grounding in the Principles which definitely leads to greater peace happiness and well-being.  So leave your comments below and if you haven’t already click on the video below which will explain this further.