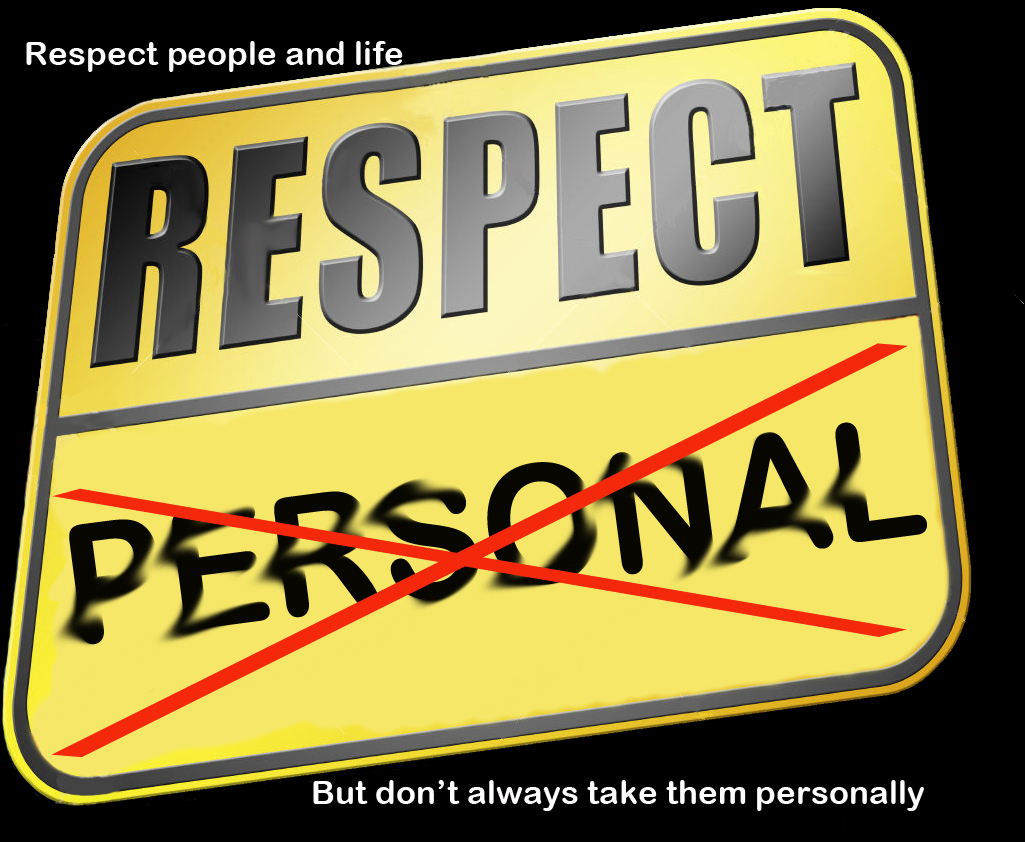 Being respectful without always taking things personally has become part of my nature as a byproduct of not taking my thinking on most things too seriously.

It doesn’t mean Life and people are a joke.

It certainly doesn’t mean life is a big joke and that I don’t take anyone or anything seriously. It does, however, mean that I  will put my thoughts under the ‘examination magnifying glass’ in order to determine how serious the situation is.  This will apply both to people and situations.

I had a friend come to me to today with a problem that he needed my help with.  As I was listening, my thoughts started to bombard me causing me to move into judgement as well things that I needed to tell him.  But then I woke up!  I realised that this is not the time for me to be inserting my own thoughts in at the moment.  What I wanted to do was be what we call in the Three principles is to be in a deep state of listening.  You can’t be fully present listening to your friend when you’re busy thinking, “what am I going to say next,” to counter what he’s telling me.

As a result, I just slowed my thoughts down to just being present with him so I could fully hear what he was telling me without ‘me’ interfering with his message.  The byproduct of this is that you fall into a very good feeling which helps create a warm connection with the other person.

He himself is a Psychologist and pretty set in his ways.  My own innate health or my inner being was telling me that I don’t think this was the right time to explain the three principles to him.  I didn’t feel that it was the right time for this.  That’s at least was my insight at that moment.  My main goal at the time was just to be present with him and make sure that I fully heard what he had to tell me.  He opened up quite a lot, more than what I’ve ever seen and I suspect that it was because I was fully present to what he was telling me at the time.

Evolving rather than doing

Let me make this clear.  It’s not something I do as much as something that I have evolved into after learning the principles and helping many others do the same thing.  Soon as you start getting caught up in ‘doing’ you lose the ‘flavour’ of the moment.  It’s just not the same as being in a state of realisation.  It’s more of an understanding of where you are that things automatically change without effort.  It’s something you see.  When I saw that my thoughts were over bombarding me at the time my friend was pouring out his heart to me, I didn’t have to settle down my thinking, it just happened automatically.

The answers for my clients usually lie within them

And that is where the magic happens because you move into a deep connection with yourself as well as the person.  And that did happen with my friend.  This conversation was ‘friend to friend’ and as a result, he wanted an answer which is something I usually shy away from as a practitioner because the answers of my clients always lie within them. All is what I do is point them into the deeper recesses of their own innate health.

But because the time wasn’t right in this particular case, I acted like a ‘friend’ and gave him some advice.  But the beauty over here was that it wasn’t like the type of what I would call ‘desperate advice’ where, “you better listen to me and do this or else it will be a disaster,” rather it was advice coming from a very loving deep place from within myself and hopefully entering into the heart of the other person as well, which I could tell it did.  You know this when you have a good feeling inside yourself as you are talking to the other person.

And the best part is that I didn’t personalise any of this.  I didn’t take anything he was saying so seriously or personally that I was attached to the outcome.  I was, however, respectful of him and what he was saying every step of the way.  This is what I mean when I said  that I respect people and life but don’t always take them personally.

And the paradox of outcomes is, that the less attached you are to the result, the easier it is to have that outcome. It may not always go the way you’d ultimately like to, but because you’re not taking the situation so personally things usually work out better in the long term even if you can’t see it that way at the present moment.  And often what might seem the worst thing out that happened might indeed be the best thing for you right now even if you can’t see it!

And in regards to my friend, I had no attachment to the outcome, and I felt that I was really heard, appreciated and had a good connection to him when it was my turn to speak.  Again this was felt even on a physical plane as I was speaking to him and I could also see from his body language that it was all going along nicely.  When you speak respectfully from the heart without attachment, it can go a really long way.  I really did care for him and his plight but it didn’t mean I had to be attached to whether he would listen to me or not.

So the takeaway from today is that when we don’t take our  thinking so seriously we usually as a byproduct are more respectful to others and the situation usually becomes aless pressing since circumstances and people only become desperate when we think they do.  Here’s the video.  I’m sure if you’ve come this far you’ll enjoy it.