The Great race where we fall into the comparison trap 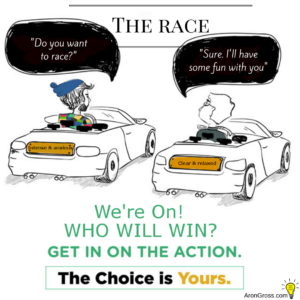 The Great Race where we fall into the comparison trap

We often get caught up in the great race where we  fall into this comparison trap when we weigh up and compare ourselves to others. But what would happen to our performance if we didn’t get so caught up in always trying to win? Competition is healthy or is it? Well, it can be, but depends on your attitude or rather to be more accurate in this discussion, your state of mind towards the goal you are aiming for.

Olympic Gold medal winners fall into 2 very defined groups after they have won the gold:
1. Highly successful careers, satisfying lives, fulfilling, studying business, working in charities, being speakers. They do very very well.
2. Tend to struggle with alcoholism, addiction to drugs, marital difficulties and all kind of problems
The difference between these two groups was very very clear. The people who did very very well after they won the gold was in their whole motivation strategy. It was about the enjoyment of the doing. It was about the journey and their attitude was, “I would love to win but I’m having such a great time here doing this that I’m not really thinking about it that much.”

There was an interview with Usain Bolt and he said, “I find that when I think too much about trying to win, I just don’t run that well. So I just focus on enjoying the crowd and enjoying the race and that sort of thing.” So when he was getting ready for the race he was busy waving and smiling to the crowd in a very relaxed way while all the other runners were doing their concentration rituals before the race. But Usain, no way, he was just busy having fun and we’re talking about the fastest man on Earth!

What they found with the second group on how they motivated themselves was by setting an ideal of “I’ll be happy when I achieve this.” But Ideals are like the Horizon. And the Horizon is a mental construct that doesn’t actually exist.

You can walk to the Horizon and have a look and it’s still far away and Ideals are still like the Horizon too. They keep a pace ahead of you. And they can be actually great for setting a direction. But they’re rubbish for measuring progress because they are often further off. So people who are trying to navigate with ideals and Horizons are unsatisfied and they’re stressed out and struggling because they are looking for the feelings of fulfillment and comfort, peace and satisfaction, but they’ve been looking in the wrong place until now.

So 50% of Olympians who fall into that category of struggle because they motivate themselves all this time thinking, “well at least once I win the Gold I’ll be happy.” And they are for about a week and then it’s all gone and like another day.

So who really wins the race

So let’s go back to our picture 🙂 Who’s going to win the race? Sure you need to work things logically through as much as possible to make sure your car or body is fit and tuned up etc. But that’s as far as it goes till we come on to a state of mind.

And just to remind you that this is not something you do rather something you understand. And the deeper you get it the better will be your overall performance in life when you come from that deep common sense and intuition that’s inside of you, me and everyone else included. We just temporarily forgot it, but now its time to wake up!

To develop your understanding on how to escape the comparison trap in this great race called life watch the video below.