The Paradox of Results 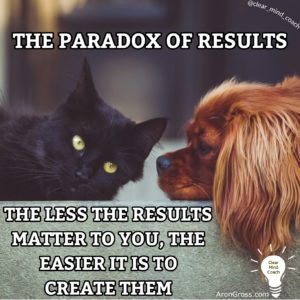 The Paradox of Results
The paradox of results is that the less attached you are to the outcome, the higher the chance you have of fulfilling on it. And that’s at the heart of why the less the results matter to you, the easier it is to create them and why understanding the principles behind a clear mind at a deeper level, can make such a difference to people’s businesses, relationships, family and everything else in between. An embodied understanding of these principles just frees up this resource of mind to allow you to work with less interference and greater clarity towards any challenge you have in life.

It helps to have a healthy detachment from the person or circumstance
Remember the classic comedy, Tommy Boy? The immortal Chris Farley plays Tommy Callahan, a happy but hapless recent college grad who is learning the ropes of sales, and trying to take over his father’s business. In the early stages, things go badly—really badly—with his sales calls. He is tied up in knots, he’s so nervous, so he crashes and burns again and again and again. But then Tommy and his colleague Richard Hayden, (played by David Spade), pull off the highway to eat at a diner. As they eat, they lament their failure; and Tommy decides he really wants chicken wings. He tries to order some from the waitress, who is cold and curt.

Waitress: Kitchen’s closed until dinner. I just got cold stuff and desserts.

Tommy: Boy, some chicken wings would really hit the spot. You sure it’s closed?

Waitress: Let me check. [Does nothing.] Yup, it’s closed.

Tommy: That’s nice. You look like a Helen. Helen, we’re both in sales. Let me tell you why I suck as a salesman.
[Tommy then goes on a hilarious, self-deprecating rant expressing his frustration at his total lack of success in sales. When he is done, Helen’s whole demeanor has changed from bad to good.]

Waitress: Tell you what, I’ll go turn the fryers back on and throw some wings in for ya.

Tommy: Thanks, Helen! Tommy like-y. Tommy want wing-y.
[Richard is amazed. He can’t believe the powerful effect Tommy had on the waitress.]

Richard: That turnaround you just pulled off with that waitress! Why can’t you sell like that?
[Tommy shrugs his shoulders.]

Tommy: I’m just having fun. If we didn’t get the wings, so what? We still got that meat lovers’ pizza in the trunk.
[Richard shakes his head.]

Richard: No, you got the wings because you’re relaxed. You had confidence.

There is huge wisdom in the dialogue between Tommy and Richard. In fact, the lesson of the scene is priceless.

Detachment is what makes you effective
Tommy is detached and that makes him so effective. And that’s the lesson for us. To put it frankly, we are the most confident when we don’t care! Ancient masters of rhetoric (the art of persuasion) used to call this the “posture of indifference,” and it is profoundly effective. Not caring doesn’t mean being heartless towards others, it just means being unattached to the outcome.

When that happens, you can get your ‘wing-y’ and a whole lot more when you remain unattached to the outcome. Tommy really wanted his chicken wings but wasn’t perturbed if he didn’t get it which is why he was able to just be his carefree himself. He became more likable by the waitress as he came into his own power of just being himself without him even realizing it.

It’s nice to have stuff but it’s not going to make me or break me
I like things too, but if I treat them more like a game with less attachment, I’m not going to be so disappointed if I don’t get them and I’ll also increase my chances since I’m more relaxed about it. It would be nice to have the latest toy and it would be great fun. If I get it, great, and if I don’t, I know I’m okay and I’ll still remain okay without it.

Next time you set  a goal
So, next time you set a goal, perhaps you’ll be more nonchalant towards the outcome and then go out and ‘play’ towards getting it. You might reach that goal, you might not, or maybe you’ll have a completely different outcome. One thing is for sure, that when you stay unattached, you’ll be more flexible and open to strategically handling any challenge that comes your way towards the desired goal whether you reach it or not.

Please watch the video below to further consolidate this important concept which can really help you find greater peace and harmony while moving forward to fulfilling your goals.