When you let go you let in 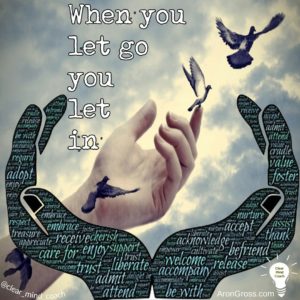 Endless possibilities arise when you let go of the old to make room for the new
The possibilities for the new are endless. But it does take a willingness to stop holding on to what doesn’t serve us very well and look within ourselves rather than without, for the answers, we seek to our own burning questions in our quest for happiness, peace, and wellbeing.

We have been taught to always look outside for the answers
We have always been educated by parents, home, and media that the answer lies somewhere out there. But when we finally let go of that, great things begin to happen.

Dr. Victor E Frankl, the great Austrian psychiatrist spent three years in Nazi concentration camps, including 5 months as a slave laborer.  His mother, wife, and brother were all murdered in these camps.  After the war, he wrote about his experiences in Auschwitz and Dachau and other Nazi death camps.  In his famous book Man’s search for meaning, he writes:

Everything can be taken from a man but one thing, the last of the human freedoms – to choose one’s attitude in any given set of circumstances, to choose one’s own way between stimulus and response, there is a space.  In that space is our power to choose our response.  In our response lies our growth and our freedom.

Sure there are plenty of people who have gone through the most harrowing of human experiences, but this still doesn’t preclude them from framing their own experience moment to moment via their thought. That’s precisely what Dr. Frankl did and if you read his book, you understand that it’s what kept him alive.

I’ll cry with you
This won’t, however, stop me from crying with you or anyone for that matter that has gone or is going through a tragedy. I’m not going to judge anyone who chooses to be upset, that’s part of the human condition. As long as we’re human we are all bound to be hit by life’s challenges sooner or later and we all cry from time to time. That’s part of the price we pay for our stay here on Earth. So, there is no need to beat yourself up when you’re down.

Good news! You are empowered to choose
The good news is that we still have the choice of what we want to think about in any given set of circumstances. You and I have the power to lift up our game just like Dr. Franklyn did. He not only survived the war, he thrived and I know you can too.